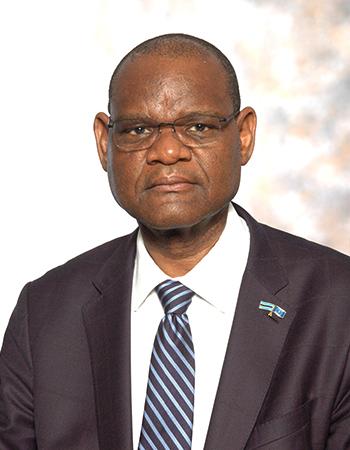 In 2003, Mr Pelaelo took a three-year sabbatical leave and joined the Financial Stability Institute at the Bank for International Settlements (BIS) in Basel (Switzerland), where he continued to expand and deepen his knowledge of banking regulation, supervision and financial stability.  As part of his work at the BIS, he coordinated a number of international conferences and presented on a wide range of topics for banking supervisors across the world, including in Africa, Middle East, South East Asia, South and Central America, the Caribbean Islands, Eastern Europe, Transcaucasia and Central Asia.  Mr Pelaelo also hosted a number of banking supervision seminars for the global group of banking supervisors at the BIS, Switzerland.

Mr Pelaelo was appointed Deputy Governor in 2006 and had overarching responsibility for banking regulation and supervision, payment infrastructure and oversight, banking & currency, accounting, security and other support services.  In addition to being a member of the Executive Committee, he chaired and provided leadership for a number of Committees in the Bank including the High-Level Inter-Agency Committee for the Financial Sector Development Strategy 2012 - 2016, Currency Design Committee, the National Payments Task Force, Regulatory Policy Committee and Tender Committee.  As Deputy Governor, Mr Pelaelo is also a member of the Monetary Policy Committee and Investment Committee of the Bank.  Mr Pelaelo also formed part of the IMF and World Bank missions on Financial Sector Assessment Programmes for some African countries, focussing, mainly, on the evaluation of their implementation and compliance with the Core Principles for Effective Banking Supervision.

As Governor, Mr Pelaelo will maintain the primary focus of the Bank on preservation of monetary stability, as manifested by price and financial stability and a sound and properly functioning banking and payments systems.  In addition, the Bank continues to uphold its role as advisor to Government, including in the formulation and implementation of the exchange rate policy and the management of foreign exchange reserves.  Success in this regard, requires maintenance and adaptation with respect to credible institutional and policy framework, coordination with other regulators and policymakers, as well as effective communication and outreach strategies.